I grew up in the mountains of Eastern Kentucky in a little town called Wolfpit. The picture to the left was taken circa 1920. At this point in its history Wolfpit was a booming coal mining camp owned by Mckinney Steel Company. When I was growing up my Mom and Dad used to talk about all the things that had been there - the movie theater and the ice rink especially used to fascinate me. At that time the coal company owned everything in the town, including the houses which were duplex. Script was used by the miners and their families to buy everything from food to a seat at the movie.

By the time I was born Wolfpit was still inhabited by coal miners and their families but was no longer a coal camp. My father bought the house we grew up in around 1940. He converted it to a single family dwelling. It is there that I have fond memories of my childhood. The mountains were our playground, everyday a new adventure awaited us. Wealth was a dime which was quickly spent at Johnson's store on a pop and candy bar. 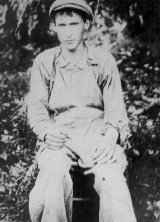 My father was coal miner. The picture to the right was taken circa 1912 in Blackwood, Virginia. He started to work in the mines when he was about 11 years old as a waterboy in Speers Ferry, Virginia. He used to talk about buying the first pair of shoes he ever owned with money he earned from that job. At the age of 14 he worked as a trapper in the mines at Blackwood, Virginia. He received $1.25 a day for his labor. Blackwood shut down in 1920. My Dad retired from Republic Steel at Road Creek on November 27,1963. He worked in the coal mines for more than fifty years and belonged to United Mine Workers of America. He used to talk about how the coal comapnies never cared about the miners before the union. If a miner got killed in the morning the company had someone in to replace them that afternoon. Coal was and continues to be King in the mountains I grew up in. It is a history of BOOM and BUST. To see a picture of my Dad 2 miles underground at work in the mines CLICK HERE

I graduated from Elkhorn City High School in 1968. This was a period of BUST for that area. Like many of the youth from eastern Kentucky I sought my fame and fortune away from the mountains I grew up in. As the years have passed by I find my heart and thoughts returning to this area. It molded me and made me who I am today. Neighbors long dead I can recall with clarity. Everyone knew who you were and mischief was soon reported to your respective parents and justice was swift and certain.

The people I knew and loved as a child instilled a sense of pride in myself and the region I grew up in. The splendor of the mountains and sense of family are treasures I hold close to my heart.