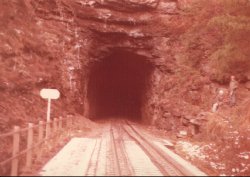 The picture is of the tunnel at Pool Point. Just saying or hearing it said evokes almost mystical feelings within me. It is at this spot that a trip to my Grandmother's log cabin both began and ended. I can recall the sounds of the area with distinct clarity. The roar of the water below gave the area an erie feeling. It is said that Pool Point has no bottom. Over the years there have been several attempts made to measure its depths to no avail.

This was a favorite fishing spot of my Grandmother. The banks were perfect for a overnight stay and fish were plentiful. I have heard that recently it has become unsafe to fish there because of people throwing things from the bridge. What a shame that this has happened. Another tradition that had existed for generations is now only alive in memories.

My Mother frequently told us to be careful crossing the bridge located there as she held on to your wrist with almost super human strength. She would tell us of past daredevil stunts that had been accomplished on the bridge and this would both frighten and enthrail young minds. During the war years the bridge at Pool Point was guarded by soldiers as it was considered vital. The trains that traveled its tracks carried both passangers and goods to all points. Some of the soldiers, who guarded the bridge, became close friends of the families that lived in the Potter Flats and were frequent visitors to their homes.

I can't recall which family member told us of the man who was killed during the construction of the railroad. But I do remember how scared I was each time we crossed that bridge for fear his ghost would chase us as it had others. Another ghost story involves my great grandfather James Potter . As he was walking on the railroad tracks to go to Elkhorn City a brisk wind passed him and he heard a voice say "There's a dead man over there". Sure enough when he looked - there was a body! I don't recall who the man was or what circumstances had lead to his death.