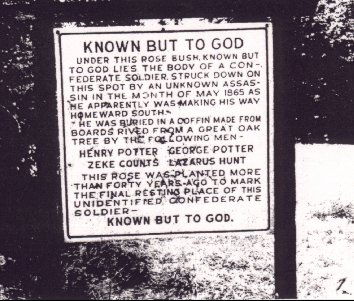 On Route US 80 just off the road is the site of the Unknown Confederate soldier's grave. This grave has been attended to over the years by various family members. Although they had only a moral obligation to care for the grave this custom remains intact. Our Grandmother used to care for the grave and as she explained "His family is not here to care for it so we must."

The Unknown solider as the story goes in our family was on his way home to the Carolina's. He had stopped at Richard Potter's and asked for a drink of water as the day was warm and he had had been traveling for a distance. He and Richard talked for a few minutes and the weary soilder left to continue his journey home. A short period of time passed and George Potter, Henry Potter, Lazarus Hunt and Zeke Counts arrived at Richard's home and told him that the soldier had been found dead.

As the women of the group tended to the body and prepared it for burial, his shirt was washed and the body cleansed to make ready for the funeral as the men prepared a coffin and gravesite. The burial of the Unknown soldier was accomplished with the assistance of Henry Potter, Zeke Counts, George Potter and Lazarus Hunt. A large oak tree was felled and the boards for the coffin were split from the trunk. The families that lived in the 'Flats were the mourners for this unfortunate son of the South. It is for this reason that he became one of our own. He was entrusted to us for the care and maintenance of his memory. A rose bush was planted at the gravesite about 1900 by Harve Potter son of Henry Potter as a memorial.

Our grandmother had in her possession his watch, cap and a handerchief. These items were kept safely in a trunk behind her bed with the watch stored in a leather pouch. This pocketwatch would be brought out on occassion and shown to us with the reminder "One day his family will come and you are to give them his watch when they do." Unfortunately this watch as well as other family treasures were lost to us when someone desecrated our grandmother's cabin shortly after her death. The vandals who did this were looking for money and when they found none they vandalized the interior and later burned the cabin. This reminds me of thirty pieces of silver that someone else sold their soul for. 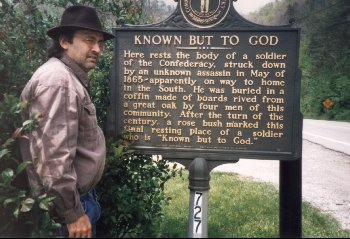 The orginial maker for the Unknown's grave has been replaced in recent years. The marker that now stands there does not mention any family names only four men of this community. These men were so much more than only four men of the community. They were the descendants of the early settlers of this region and as such deserve to be recognized. We should take pride in our family and know that they have entrusted us with the memories they left to pass on to the next generation. The photo is our brother Billy at the marker in 1997.

An interesting footnote to this story is the location of a spot below the gravesite which will pull your car up the incline towards the grave. This supposedly is the ghost of the soldier pulling you towards him for help. This used to be a favorite thing to do. To drive to the spot, stop your car and have it mysteriously pulled toward the grave.