The music on this page is entitled Fallen Hero. 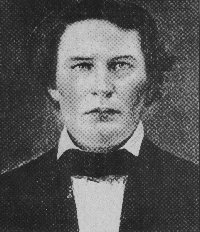 In today's politicial arena where honesty and morals are often viewed as archaic it is indeed rare to view a politican who had the moral fiber to stand up and be willing to give his life for beliefs he held. One such person was George W. Johnson. Mr. Johnson has been ignored by history when in fact he should be held up as an example for all. He truly believed in a cause and made the ultimate sacrifice for this. George W. Johnson was the only Civil War governor to die of wounds he received in battle. You may say that he lived in a different time and their beliefs are as dated as those that lived in that period. I would say that morals and character should know no time period and in our uncertain times are more important than ever.

George W. Johnson's family was among the early settlers of Kentucky and was very influential in this state. His grandfather, Robert Johnson, served in the Revolutionary War and was in fact a Colonel in that great conflict that won our freedom from English rule. Those that served in this great conflict were viewed as traitors by the British goverment but, are viewed as heros today in our country.

George W. Johnson was born on May 27, 1811 in Georgetown, Kentucky. Mr. Johnson attended Transylvania University in Lexington, Kentucky in the early 1830's and graudated from there with 3 degrees including one in law.

Mr. Johnson opened a law office but soon found he was more interested in agriculture than law. He closed his law office and began farming on 300 acres of land outside of Georgetown. He also operated a 1,000 acre farm in Arkansas where he resided in the winter months.

Another area in which Mr. Johnson was interested was politics. He was known in Kentucky as a fair and honest politican. It was with his help that Kentucky became a Democratic stronghold. He continued to build a strong political following and was offered nominations for both the lieutenant governship and a bid for the U. S. Congress. He declined both to remain in "private life". However, he was elected to the Legislature in 1838 representing Scott County. He made the race for Presidential Elector in 1852 and 1860. He declined repeatedly to be a candidate for Congress and acquired great political power in his party.

At the very outbreak of the civil war he cast his lot with the South, and used every exertion to induce Kentucky to follow the seceded States. He was largely instrumental in organizing a provisional government for the State. On November 18, 1861 the convention assembled at Russellville for that purpose, and he saw his desires carried into effect. A constitution for the State was adopted, under which Kentucky was admitted under the Confederacy, and he was chosen Provisional Governor.

After the Confederacy was compelled to move from the southern part of the state he accompanied the army. He took the oath of a private, and enlisted in Company E, Fourth Kentucky Infantry. He was wounded at the Battle of Shiloh on April 8, 1862 and died of his wounds the next day. I wonder what thoughts were on his mind as he reached the decision to enlist. I am sure his family weighed heavily on his mind as he came to the conclusion that the needs of the many outweighed the needs of the one. Those who knew him remembered him as a brave, generous and noble hearted man. He left a wife and seven children to mourn him.

In conclusion while it may be that he believed in a cause which is today vilified, it is a cause for which he was willing to make the ultimate sacrifice. I wonder if the politicans who govern us today would be willing to do this? Do you think any of them would put themselves in harms way to defend what they require of us? The decisions they make impact all Americans. Are you confident that these decisions are made by men of high moral standards or does this mean nothing in today's society? Should we expect our sons to fight and possibily make that "ultimate sacrifice" when today's politicans base decisions on personal greed instead of the public good? Can you really expect a man to be committed to his country and its people when he disregards the greatest commitment one can make to his wife? I for one would rather follow a man like George W. Johnson who not only fought for beliefs he held dear but died to defend them. I would say that all us should remember that as the poem says "children learn by example". What kind of example are we setting for them? We defend people who lack the moral fiber to be faithful to anyone person and tout as hero's those who blatently defile our country.