All information contained on this page is copyrighted material and may not be reproduced in any form without the written permission of B. L. Williams.

A young boy sits on his great grandfather's lap and is told stories that will last a lifetime and whisper to him as he grows older. These stories are of extraordinary events that happened before the grandfather was born or during his youth. Even though these events had occured long before the boy was born he sat enthralled as he listen to his grandfather's voice. The grandfather is James Potter and he is retelling stories that had been told to him by his father Andrew Potter and also events that he had experienced . These stories involved the Civil War and happenings related to it and because of it. Tales of Quantrill's Raiders, Bloody Bill Smith and friendships that formed and lasted a lifetime. 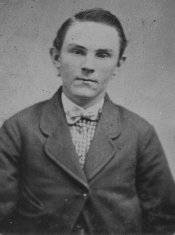 The photo of Jesse James was taken c. 1866 and is from the James Potter collection. It is copyrighted 1996 by B. L. Wiliams. All Rights Reserved. Jesse Woodson James was born 5 Sep 1847 in Kearney, Clay Co., Missouri and was murdered on 3 April 1882 as he was dusting his home in St. Joseph, MO. His parents were the Rev. Robert James and Zerelda Cole . His father was a Baptist minister who helped found William Jewell College in Liberty, Missouri. Jesse Woodson James was shot in the back by his longtime friend Robert Ford, "the dirty little coward who shot Mr. Howard, and laid poor Jesse in his grave", in order to collect a reward. Jesse James and his brother Frank were more than acquaintances to the Potter families living in the 'Flats. They were considered friends. Not only did they share service in the Confederate Army, they truly believed in the cause for which they had served. Many stories have been told about the "outlaw" James Gang . These stories tell of murderous villians that robbed banks and terrorized the citizenry. These stories are in stark contrast to the stories told by our grandfather. According to James Potter the bank robberies were a means to an end - to ensure the continuation of the South. 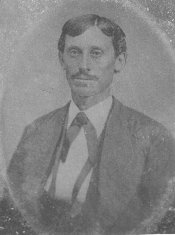 The photo of Alexander Franklin "Frank" James was taken by Christien Evick at Ashland, KY circa 1875. It is copyrighted 1996 by B. L. Williams. All Rights Reserved. From the James Potter collection.

The secluded hills of the Potter Flats were a perfect place to relax and wait out the law men that were in constant pursuit of the brothers. Here they could relax and enjoy the camaraderie of old friends, hunt or fish with no fear of the unwelcome notice of strangers. Here they could be sure of those that were around them and for a time just be themselves.

The Huntington, West Virginia Bank Robbery that occured on 5 September 1875 liberated $10,000.00 and was an act of vengeance by the James boys for a wrong that was done towards the end, or just after, the civil war.

We are interested in any others who may have heard stories relating to the James Gang and eastern Kentucky . Please feel free to email us!