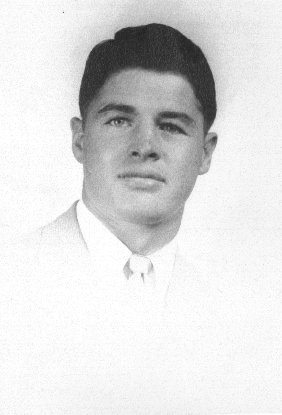 George W. Stewart, JR. was 31 years old when he died on September 26, 1957. He was a popular figure around the Elkhorn City area. He was an outstanding football player at Grundy High in Virginia. After college he was the football coach at Elkhorn City High School -- a promising career that was cut short by his untimely death. He was also an outstanding amateur boxer who fought at Ramsey in Bluefield, Virginia. He served 2 years with the U. S. Navy in the South Pacific during World War II.

His motorcycle shop "G. W. Stewart Cycle Shop" located on Route 80 was a popular hangout for the young men of Pike and the surrounding counties. Our brother Jim Belcher bought his first motorcycle at his shop as well as being an employee.

Our grandmother who was in her sixties when he died was a frequent rider on his motorcycle. If he caught sight of her walking by his shop he would call out "Come on you've got to try this one", a smile would cross her face, out came her headscarf and on the back of the cycle she would climb. His constant refrain to her was "Now let me know if I'm going to fast" her answer "I don't care if you make it fly".

He had a quick wit and a smile that radiated love. He embodied the hopes of his generation - young, talented and lived life to its fullest.

This photo is the property of Johnny Stewart and is used with his permission.