William Ramey was born in 1782 in Westmoreland Co., VA. He died in 1865 in Pike County, KY. He is buried in the Elkhorn City Cemetery. 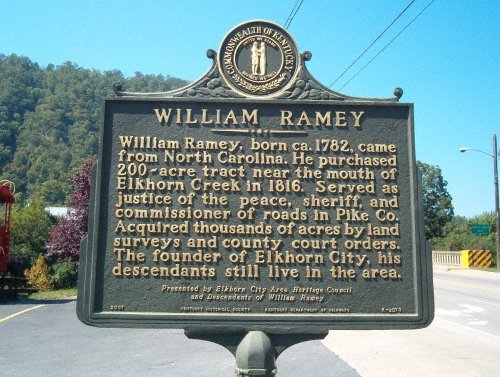 William Ramey and his wife Anna Salmins moved to the Elkhorn City area in the early 1800's. He built a home near the mouth of Elkhorn Creek. It is believed he once owned all the land from Millard (then called the FORKS), at the forks of the Russell and Levisa rivers, to the head waters of Grassy Creek in Virginia, which included a large part of the Breaks region. The Last Will and Testament of William Ramey of Pike County, KY. Pike County Will Book B, Page 50, dated 12 Apr 1864, proved 19 Apr 1866. (This will disposed of some 7512 acres in Pike County, KY and 2180 acres in Buchanon County, VA, which was sold and split between heirs). To eldest daughter : Mary Potter, To sons - Moses, Daniel, William, John, Charles ( to 3 eldest children by his first wife: Miles, Lloyd, and Riley). To my fathers youngest and last grandson: Isaac, To daughters: Rebecca Bentley, Ann Bentley, Nancy Belcher, Easter Stewart, and Elizabeth Hunt. Executor appointed: My son Moses.

William Ramey was married to Anna Samlins (daughter of ? Samlins and Elizabeth Samlins ). To see a photo of their tombstone CLICK HERE.

Anna Samlins was born in 1784 in South Carolina. She died on 18 Nov 1865 in Pike County, Kentucky. She is buried in Elkhorn City Cemetery. William Ramey and Anna Samlins had the following children: