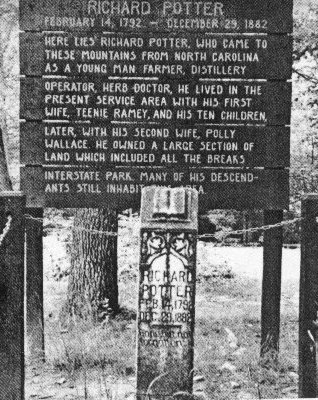 Richard Potter was born on 14 Feb 1792 in North Carolina. He died on 29 Dec 1888 in Buchanan Co, VA. He is buried in Breaks Interstate Park, Va. He owned all the lands that are currently in the Breaks Interstate Park. According to family stories he was buried beneath the cedar tree that he frequented during his periods of meditation. As the marker states he is not forgotten. His children settled and lived in the area known as the Potter Flats. A 19th century writer after a visit to to the Potter clan published a book in which he wrote they were "molded with a gentle spirit". The tombstone was paid for by Mose Potter Jr, Babe Potter and Elihu Tackett. They hued timbers into cross ties, sold them and finished paying for the stone which was purchased from Richard's stepson Enoch Wallace for $48.00.

The Descendants of Mary Christine "Teenie" Ramey Potter will be holding a dedication ceremony for her memorial marker on Saturday May 24, 2003. We will be hosting a Spring Tea after the dedication ceremony. For information on tickets to the Tea, please visit the Potter Flats Gift Shoppe .