Andrew Potter was born on 4 Jun 1828. He died on 20 Oct 1904. Was not able to cry. Family stories say when son Richard "Dick" died he walked perimeter of yard for 2 days and nights without stopping to ease his grief.

Andrew Potter lived in the Potter Flats. His log cabin was located on the same spot where his son James would later build a home. James orginally lived in a log cabin he had built a short distance from his father. James' oldest son Adam married and moved into the cabin with James' family. Once Adams' wife began to have children James started building a milled lumber home on the spot where Andrew's cabin had stood. The lumber mill was in the Flats and was owned by the Potter Clan. This same saw mill was still being used in the 1950's. Andrews' great grandson Bart Belcher would operate the mill when they needed lumber.

I am a unreconstructed rebel that's just what I am,
For this fair land of freedom I just don't give a damn,
I fought so hard against her with a sword and a gun,
I'll ask no man for a pardon for anything that I've done. 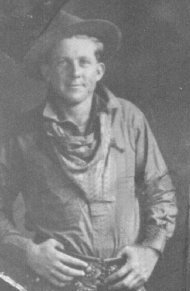